Building our House on foundational principles is the The Hebrew Way.
The first question we must ask and answer is:  What is this House?  To illustrate, let me take you through my experiences of this last week.

On Friday, I received one of those calls which changed the course of my day.  It was a friend and colleague and she was asking some really good questions of me about how to help our children build a proper foundation.  It drove me to writing.  I wrote most of that day to help answer her questions, but mostly, I wrote to clarify the answers in my mind. On Sunday, I was asked to speak in my congregation on practically this same topic.  On Wednesday, one of my sons came to me wanting help in writing a paper which was due the next day.  He asked me what story or scripture he could use to back up his opinion.  I read the question prompt, Compare the leadership of Brutus and Caesar.  Which would you follow and why?, and shared how I thought the man Korihor might be a good example to use.  Just then, I had a flash of a realization.  I realized that if we give ourselves or our children an excellent "education" and their foundation is not built on Christ, on Truth and right thinking, the affects could be disastrous.  I knew their character or House must be developed on foundational principles.

Now, Korihor was a man who knew how to speak, persuade and manipulate others to join in his cause.  He took power and lead in tyrannical ways.  He came into towns and spoke against the peoples religious beliefs.  It was as if he once held those beliefs because he took truth and twisted it for his own agenda.  He belittled and mocked those people and God.  He claimed there was no hope in any Christ, and the only hope was our own genius and strength.

Korihor was preaching a very common agenda we can see today.  "Do and Become with your own strength and agenda.  And follow me in the meantime.  I will be the expert for you to follow.  You can perfect yourself.  Rely on your own strength."  We hear these type of voices whether just in our head or manifested around us.  We read in books like Atlas Shrugged principles of reliance on man; the building of the perfect man; the virtues which make man off the hook of accounting for themselves.  It is complete narcissism and it's everywhere.

Then, on Thursday, I was in a Board meeting and we were discussing the education we promote and how careful we as parents have to be to guard against this infiltration of base values.  My friend is attending a University class and she is re-reading books like Leadership and Self-Deception, Bonds that Make Us Free, etc.  She also began reading additional books which helped her make even more connections as they looked at Narcissism.  One of the things she shared was about George Washington.  According to his "genetic predisposition", he could have classified in the category of a Narcissist.  He had all the natural abilities which could have lead to that "perfect man."  However, his environment was God-fearing and wholesome which helped develop his whole being on principles of faith and integrity and brought about a sound character education; what today we would consider as a Godly-centered character education.  It was this character training which gave him the servant leadership abilities to help lead our nation's original revolution and ensure America did not have a king among many things.

This is our problem today.  Narcissism is on the rise and I realized in that quick flash, if we do not build our own or our children's character education or foundation on Christ, on Truth and right thinking, we can easily produce Narcissists.  I realize as well, this was most likely coming to me because of the son I was helping at that moment, whose foundation was not as strong as some of my other children, but it is also a universal problem to beware.
The conversation was perfect for me to more fully describe the why behind getting a Godly-character education or developing our education on foundational principles.   I do things very often from my heart and do not always have the words to describe how I know they are the right things to do.  I have always felt it was right to use my precious time in my home to read and tell stories which teach a high standard of virtues, memorize scriptures & poems of value, sing every song which would teach and nurture the same.  My efforts have been spent only towards the best for my children.   After this week, I have been gaining the words to describe what I do, which is sometimes the hardest thing to describe, as well as the resolve to be even more deliberate with my time with my children.

A story came to my mind in the midst of all this: 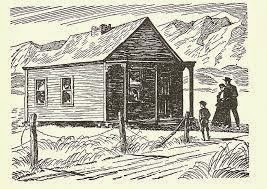 Ralph Moody had recently moved West to Littleton, Colorado with his family in efforts to be ranchers.  At his school, with his buster brown suit on, he was tired of being teased and determined to overcome.  He spent his recess time showing how he could ride the donkey without getting thrown off.  This helped feel more credible.  At home, he grew over confident and continued his storytelling.  One day, when his Father was gone into town, he told his sister their Father wanted him to bring in the railroad ties that were left in the gulch.  His sister didn't believe him.  He got home and continued the story with his Mother.  She commented something about how on earth Father would want an 8 year old boy to do this work on their new unbroken horse.  Ralph worked all day and couldn't even bring one railroad tie out of the gulch.  He realized he had better go home and tell his Mother he had lied.  Mother had him stand in the corner while she sat at the table and read from the bible until Father got home.   When he got home and found out what Ralph had done, we said he would not give Ralph a whipping because he may remember that more.  He then said, 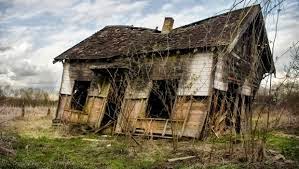 "A man's character is like his house. If he tears boards off his house and burns them to keep himself warm and comfortable, his house soon becomes a ruin. If he tells lies to be able to do the things he shouldn't do but wants to, his character will soon become a ruin. A man with a ruined character is a shame on the face of the earth.”

This was what I immediately knew when I saw how I could produce an educated Korihor; Our Character House is Our House and must be developed on solid foundational principles.
Our character is our foundation and needs nurturing to be built on the rock of Christ.

Here are some foundational words speaking about this House:

Set in order your own house.  Govern your house in meekness and be steadfast. Seek learning even by study and also by faith... to prepare every needful thing and establish a house: a house of prayer, house of fasting, house of faith, house of learning, house of glory, house of order, house of God.   D&C 93:43, 31:9, 88:119

How do we build our House?  We look to our root system, foundation or to this character which determines what ground we stand upon and how we act, what we do and who we are becoming.

We can follow the principles of Creation and our life will truly be in order.

We can create these principles within the most essential Environment of God & Family which helps nurture a foundation on Christ!

What can we do in this environment to nurture a desire to know God?


Create the environments which will help nurture a sincere desire to put God our Creator first and come to know Him; for ourselves.  I promise your good example will set yourself, and your children, on a Course to begin Building Your Houses.

Then, show others how to build their own Godly or Christ-centered character House.  For Christ is the rock on which to build everything and every House.  He is the beginning and the end.  As we build our Houses, our Moral Character Education and personal convictions which lead us to act in virtuous and faithful ways, we will be building Houses unto the Lord.

Read more HERE
Amazingly, this speech was given, the same hour of my finishing these thoughts, about Building Our Foundations.