In these "Discovering" posts, I will be sharing insights and personal discoveries I find as I open Christ's Word with belief.   Here is one I found today:

I was reading about the story of Enos.  His story is very profound and illustrates a model of becoming whole, transformed and reborn.

Because of his Father, Enos had been nurtured and admonition of the Lord.  He had come to the point where he wanted to know more for himself.  He shares of the inner most wrestle he had seeking for a remission of his sins.  In his quest, he began to reflect upon his life and the Eternal Life he desired.  These reflections brought him to recognize and really get present with his own situation.  Enough so that he cried out to his God all the day long in mighty prayer and supplication for the welfare of his soul.  After a day and through the night, a voice came to him saying his sins are forgiven.  Enos knew it was true, he could feel his guilt was swept away!

After Enos experienced this, his life changed.  Almost immediately he had had the inner confirmation that his faith hath made him whole, he began to feel a desire for the welfare of his brothers and he poured out his whole soul for them.

First, Enos reflected on his own state.  He recognized he was without God in his inner soul;  recognizing he was in great need!

In the Sermon on the Mount,  Christ tells us: "Blessed are Poor in Spirit."  As I have done word studies on "poor," I have found to be poor means to recognize we are without Christ in us.  We are empty or in need of being cleansed.  When we come to this recognition, it gives us clarity which brings us to the next step.  Enos had a moment of true self-honesty and recognition!  It brought him pain and mournfulness enough to call out to his God, release it to Christ and open himself up to be teachable.  These steps we can call being mournful and meek.

"And now I would that you should be humble, and be submissive and gentle; easy to be entreated...." 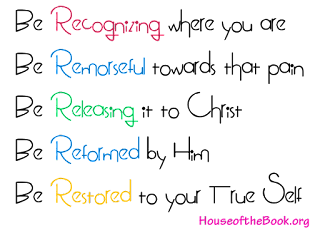 Once Enos chose these beginning steps, he was transformed, experienced rebirth and became open to receive a greater call.  He could then be taught by His God further and become an instrument in God's hands in behalf of his brethren.

I am sure in his process of being transformed, he was also being restored to his True Self.  He was becoming whole.

Lesson from the Principles:  To become whole (#1) we cannot be without rebirth and transformation (#8).  In the first principle of wholeness, faithfulness and truly one with God, we must experience the eighth principle of being Born of God.

Lol, I'm shaking my head... I just can't get over how much God has given to you! Your book is all here on your blog!
You are a choice, choice Daughter of God!
You are something else, Katie Hansen!!!