The 4 Ways of Living The Hebrew Way

Several years after I began on this journey to understand the "The Hebrew Way," I started looking at what I was studying and the questions I was asking.

One of the books that impressed me at that time in 2008-2009 was a book about a man, Earnest Thompson Seton, who had lived among the Native Americans and documented their ways and worship of the Creator.  He was deeply impressed by the extreme stoicism and integrity of these men.  Warriors were trained early to gain a vision of who they were and were disciplined to master themselves beyond what the settlers had ever seemed to obtain.  They were deeply committed people in every aspect of their life - to the Creator, their relationships and roles with each other, their intellect, and their physical capabilities.

They were religiously focused on developing their character in the Body Way, the Mind Way, the Spirit Way and the Service Way. 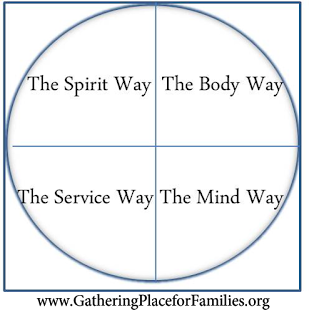 These native people even had 12 commandments they kept, including to love their God with all their heart, obtain perfect manhood, and dedicate that manhood for the service of their people.  Included in their role to attain their manhood, was "the just development of every part and power that go to make a man and the fullest reasonable enjoyment of the same."


Daily worship was symbolic of their soul's communion with their Creator.  Because they believed "the body is the soul made visible, [and they were] constructing the soul and the body that will be [theirs] in the next life," prayer, fasting, and service to their tribe were a great part of their efforts to "raise the quality of [their] being so that [they] enter the next life" with knowledge of their god.  Worship was an individual experience as they participated in certain rituals in their day.  For instance, they awoke at daybreak, stepped into the cold river, and then stood erect as they faced the dawning of the sun as it stretched across the horizon.  "Each soul," as was recorded, "must meet the morning sun, the new sweet earth, and the Great Silence alone."  These devotions meant more to them than their daily food.

Their trust in the Great Spirit who was unseen and mysterious, was impeccable.  They were humble, meek, lowly of heart and held sacred the laws of chastity and marriage and family.  They were also cheerful, honest, and kind.  These people consecrated their life to the God they knew.

This "Ancient Way" was truly inspiring to me.  The Light and Truth in it drew me close and spoke to my Spirit.  Did this people really have laws like the "10 Commandment" from the record of Judah?  How were their teachings so similar to the Gospel of Christ?  Was it a coincidence that they patterned their life after the life of Jesus who "increased in wisdom, and stature, and in favor with man and God?" (Luke 2:52)   What was this Ancient Way?  I wanted to understand more!

The most significant things I observed from this book were the importance of:
Each day and year since within our family we have tried to pattern our life after this "way."  It has helped us keep academic learning in the proper perspective instead of being the sole purpose of life.  I believe it truly is an aspect of the Ancient Way, even the patterns and ways of the most Original culture and people of the Earth - the Hebrew people - from Adam to Noah, and from Noah to Abraham of Hebron, the Father of the Hebrews.